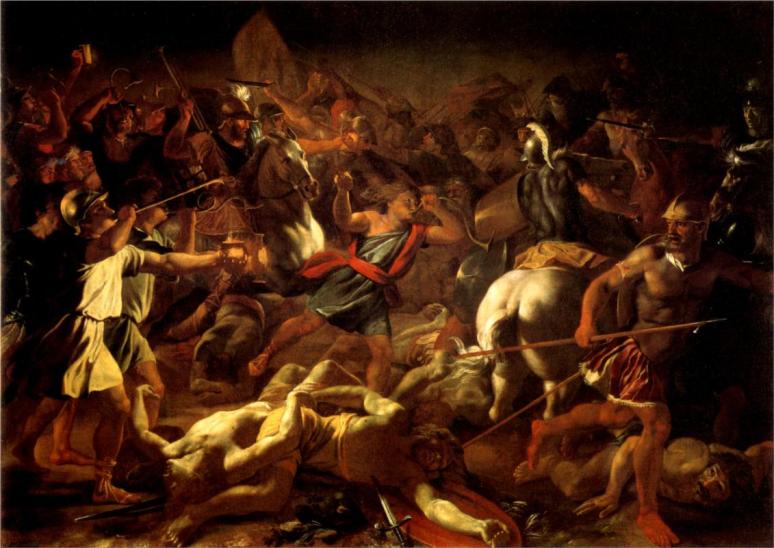 The book of Numbers tells how God incited Moses to attack the Midianites. His army made short work of slaying all the men, and they burned all the Midianite cities, but they spared the women and children. This merciful restraint by his soldiers infuriated Moses, and he gave orders that all the boy children should be killed, and all the women who were not virgins. ‘But all the women children, that have not known a man by lying with him, keep alive for yourselves’ (Numbers 31:18). No, Moses was not a great role model for modern moralists.

In so far as modern religious writers attach any kind of symbolic or allegorical meaning to the massacre of the Midianites, the symbolism is aimed in precisely the wrong direction. The unfortunate Midianites, so far as one can tell from the biblical account, were the victims of genocide in their own country. Yet their name lives on in Christian lore only in that favourite hymn (which I can still sing from memory after fifty years, to two different tunes, both in grim minor keys):

Christian, dost thou see them

On the holy ground?

How the troops of Midian

Prowl and prowl around?

Christian, up and smite them,

Smite them by the merit

Of the holy cross.

Alas, poor slandered, slaughtered Midianites, to be remembered only as poetic symbols of universal evil in a Victorian hymn. (Richard Dawkins, The God Delusion, pp. 277-278).

As we progress through The God Delusion, we see Dawkins leave the arena of science for a while and head into Christian theological discussions, particularly the moral character of God who orders that His people, the Israelite, kill neighboring nations in the Old Testament. In the excerpt above, author and zoologist Richard Dawkins discusses the moral problem with war in the Book of Numbers contained within the Old Testament, Jewish Scriptures.

In his excerpt above, we see that Richard Dawkins is offended by the slaughtering of other nations in the Old Testament. In this specific case with the Midianites, Moses tells the Israelite troops to kill every woman except for those who’ve never been sexually intimate with any of the Midianite men. As for the others, they were to slay them. Dawkins views this as terrible and eventually calls the slaughtered nation “poor slandered, slaughtered Midianites.”

This discourse is designed to get us to see God as morally monstrous, a God who makes those who follow Him just as “morally suspect” as Dawkins claims He is. But Dawkins’s evaluation of the Midianite slaughter is half-baked.

Why God commands the slaughter of the Midianites

Let’s visit the book of Numbers, since Dawkins attempts to make the Midianites the innocent victims and God the “moral monster” of it all. According to Numbers 25,

16 Then the Lord spoke to Moses, saying: 17 “Harass the Midianites, and attack them; 18 for they harassed you with their schemes by which they seduced you in the matter of Peor and in the matter of Cozbi, the daughter of a leader of Midian, their sister, who was killed in the day of the plague because of Peor.” (Numbers 25:16-18, NKJV)

God doesn’t just toss dice and say “heads” or “tails,” then, “I need to pick on any foreign nation and kill them for kicks; oh, I’ll just kill the Midianites.” This is not the motivation behind God’s command to kill them. Rather, God tells Israel to attack and slaughter the Midianites “for they harassed you with their schemes by which they seduced you in the matter of Peor and in the matter of Cozbi, the daughter of a leader of Midian” (v.18). The Midianites, in short, not only moved the nation of Israel to worship Baal-Peor, their false god, and sacrifice to their god, but also moved Israel to be tempted by the presentation of a Midianite woman in the camp.

These two actions by the Midianites were nothing short of aiding and abetting the Israelites into sin. First, sacrificing and worshipping other gods was forbidden, and God let the Israelite nation know that through His law.

The divine command against pagan worship

12 ‘For I will pass through the land of Egypt on that night, and will strike all the firstborn in the land of Egypt, both man and beast; and against all the gods of Egypt I will execute judgment: I am the Lord. (Exodus 12:12)

23 For My Angel will go before you and bring you in to the Amorites and the Hittites and the Perizzites and the Canaanites and the Hivites and the Jebusites; and I will cut them off. 24 You shall not bow down to their gods, nor serve them, nor do according to their works; but you shall utterly overthrow them and completely break down their sacred pillars. (Exodus 23:23-24)

32 You shall make no covenant with them, nor with their gods. 33 They shall not dwell in your land, lest they make you sin against Me. For if you serve their gods, it will surely be a snare to you.” (Exodus 23:32-33)

And in Numbers 25, the main passage of this post, the Israelites did what God told them not to do: they worshipped other gods, ate and sacrificed and bowed down to other gods (Numbers 25:2).

As can be seen, the Israelites were forewarned against bowing down, sacrificing to, and worshipping foreign gods.

Not only did the Lord forbid pagan worship, He also forbade the intermarriage of Israel with pagan nations. These nations were not walking with and obeying the God of Israel, and to follow them would lead to the nation’s undoing.

Exodus 34:12-16 is recited above but should be recited here again because it pertains to the divine command to slaughter the Midianites in Numbers 25:

Why keep some of the Midianite girls?

Dawkins attacks the idea that Moses would command the Israelites to kill the Midianites, and I’ve said above that they led the Israelites astray and tempted them to sin against their God in more ways than one. But Dawkins focuses on the women in his quote as well when he mentions that Moses told the Israelites to keep the virgin women but eliminate the non-virgin women. This seems immoral to Dawkins, as he then writes, “No, Moses was not a great role model for modern moralists.”

What I believe Dawkins misses in his claims about Moses and God is that God is the Judge of all the earth, a title acknowledged by Abraham in Genesis:

God is the Judge of all the earth, and in His role as Judge, He is Sovereign and moral in punishing the pagan nations because they do not acknowledge Him or His law. The Midianites, as we’ve seen in Numbers 25, encouraged the Israelites to worship their god Peor and intermarry with their women — which made them enemies of Israel and ultimately, of the God of Israel. Since God is Judge, and the Midianites fought against God and His wishes for His people, did He as Judge not have the right to kill the nation and slaughter the men and male children (and the non-virginal women)? Yes, He had the right to do that.

Dawkins takes offense with God’s decision to slaughter the Midianites, but he forgets that the Bible teaches that God is the Sovereign Judge over all nations, that He alone renders judgment regarding who lives and who dies. He is the Giver of life, the Giver of breath, the Creator of all life forms and the Maker of all humanity. As Judge, does He not have the sovereign right (and is He not acting within His just character) to punish pagan nations by death if they are in direct defiance of His law? If an earthly judge decided to sentence a career murderer to death, would Richard Dawkins accuse the judge of being immoral and inhumane?

This is the same man who thinks assisted suicide is to kill people in the same way that one puts dogs to sleep (The God Delusion, pg. 399). How is killing transgressors and those who encourage sin and defiance of God’s law any worse than the assisted suicide of human beings?

When it gets to the virginal young girls, the question becomes, “How could God save them but kill all other women?” Well, what we’re seeing with the sparing of the young virginal girls is grace; God has the prerogative to extend grace as He pleases. If the book of Numbers told us that God had all the women slaughtered, both young and old, Dawkins would’ve accused God of being a moral monster; God spares the young virginal women and Dawkins accuses Moses (and implicitly, God) of being anything but a moral example for humanity in the twenty-first century. God will never win in the heart, mind, or writings of Richard Dawkins.

Instead, God has decided to extend grace and maintain some alive while killing the majority. Those who live will have to adhere to the God of Israel as spoils of war and will still be treated humanely as the wives of the sons of Israel. The men who captured them in war may very well have given the women over to their adult sons for marriage. Contrary to forging a covenant with the pagan nations by way of intermarriage, God would give these virginal girls to the Israelites — and the Israelites would bring these women under the covenant of the God of Israel rather than see Israel’s sons brought under the pagan covenants of these godless nations. Different circumstances allow for God’s grace to spare the Midianite girls and allow these virgins to be given to God’s own people.

Finally, there’s another good reason behind why God doesn’t kill all the Midianites but spares the young virgin women: the Midianites were relatives of the Israelites, seeing that Abraham, the one through whom the nation of Israel formed, was also the father of Midian with his second wife, Keturah (Genesis 25:2). From Midian, Abraham’s son, came the Midianites. Though God tells Israel to slaughter them, in His mercy, He spares some of their relatives.

I’ve said much here about the Midianites, but the goal has been to see why it is that God commanded a genocide of sorts with the Midianites.

Dawkins has said that Moses is no modern moralist, but Moses got his orders from God; he wasn’t giving his orders but instead, commandments from God’s law. God is Sovereign Judge and kills the Midianites because of their sin and their attempts to move their relatives (Israelites) to rebel against the one true living God. The Midianites are not “poor,” as Dawkins describes them. They are not helpless, nor should they be pitied. They moved Israel against God and attempted to entice them, and by so doing, declared themselves to be enemies of God and His law.

You can’t label God a moral monster when He, as Sovereign Judge, righteously punishes an ungodly nation of people and gives their virgin girls over to His people. He tolerated the sins of the Midianites as He did the sins of other nations until He got to a point where He’d take it no longer. When their iniquity was full, God punished them (Genesis 15:12-16). And the time He delayed their punishment is a sign of His grace (unmerited favor). So, even in the divine wrath, we see divine grace.

And in the divine wrath against the Midianites, we see divine grace (that he spares some of the Midianites, the virginal women, from death). Dawkins focuses on the killing to take your eyes off the entire picture that incorporates wrath, righteous judgment, and grace.