Imagine that you are watching a really great magic trick. The celebrated conjuring duo Penn and Teller have a routine in which they simultaneously appear to shoot each other with pistols, and each appears to catch the bullet in his teeth. Elaborate precautions are taken to scratch identifying marks on the bullets before they are put in the guns, the whole procedure is witnessed at close range by volunteers from the audience who have experience of firearms, and apparently all possibilities for trickery are eliminated. Teller’s marked bullet ends up in Penn’s mouth and Penn’s marked bullet ends up in Teller’s. I [Richard Dawkins] am utterly unable to think of any way in which this could be a trick. The Argument from Personal Incredulity screams from the depths of my prescientific brain centres, and almost compels me to say, ‘It must be a miracle. There is no scientific explanation. It’s got to be supernatural.’ But the still small voice of scientific education speaks a different message. Penn and Teller are world-class illusionists. There is a perfectly good explanation. It is just that I am too naive, or too unobservant, or too unimaginative, to think of it. That is the proper response to a conjuring trick. It is also the proper response to a biological phenomenon that appears to be irreducibly complex. Those people who leap from personal bafflement at a natural phenomenon straight to a hasty invocation of the supernatural are no better than the fools who see a conjuror bending a spoon and leap to the conclusion that it is ‘paranormal’ (Richard Dawkins, The God Delusion, Kindle Edition, page 155).

Analogies are a common way to provide understanding on what can be a complex subject. The quote above is taken from Richard Dawkins’s The God Delusion, a book where Dawkins says that Christians err in believing that there’s a God. Christians are “deluded” about the existence of a Creator and thus, believe there to be one when reality shows or says otherwise. This quote above pertains to an analogy Dawkins makes between Christians and spectators of a magic trick. In the same way that magic tricks give an illusion of special powers in the performer, thus nature gives an “illusion” of design when there is none to speak of. And Christians, deluded by the “magic trick” of nature, presume that there must be a God who created it because they can’t conceive of any way that nature could arrive here without an Intelligent Designer guiding it.

Dawkins tries to discredit Christianity, but his “Magic Trick” analogy fails in a few places. Let’s explore them below.

Magic tricks are learned, the origin of life is still a mystery

Dawkins is rather proud of his magic trick analogy, but it fails because it presumes that someone has been able to re-create the origin of life event. Sure, Dawkins focuses on the magic trick as an illusion to say that the presumption by Christians that “God did it” is an illusion as well, but it’s worth saying that, unlike magic tricks that are rehearsed tirelessly until they look “magical,” no one has been able to recreate how life began in the science lab. So, Dawkins’s magic trick analogy is already starting to look suspect.

I look forward to the day when science remotely closes in on the presumed chemical makeup for the origin of life (the chemicals involved), but few chemists, even in 2017, would presume they’ve reached that point.

Magic tricks are seen by humanity, but no human was present when life began

Every human on earth today can go view magic tricks (there are no shortage of them), but none of us (nor any human, for that matter) was present when life began. According to Genesis, mankind was the last of God’s creation, so we wouldn’t have been present to see the sun, moon, stars, cloud/sky, lakes/oceans, etc., when life began as we know it.

If we’ve never seen how life originated (unlike how magic tricks are performed), positing a supernatural God as the One who made it all is a logical argument in the absence of scientific evidence. The earth has existed for billions of years (according to evolutionists), and the lack of chemical replication to demonstrate the origin of life shows that the appeal to a supernatural origin isn’t illogical. If a supernatural being created all we see, we would expect that man, no matter how intelligent and developed he is, would never be able to replicate that supernatural act at the beginning of time.

Magic tricks have a natural explanation for them, the origin of life may not

When one looks at a magic trick, a learned magic trick, one can infer that there’s a perfectly good explanation for it that unravels the idea of it being a true magic trick, a true display of supernatural power. For example, take someone who snaps his finger and the penny between his two fingers disappears. Someone may be fascinated with that, but it’s likely that the individual has only had the penny fall in the arm of his shirt. He may have to shake his shirt for the penny to “reappear.” Here are some examples of magic tricks that are really just science.

The same thing can be said about the magic trick that requires someone be chained up in a box, and then the box is submerged in water. Someone watching it may wonder, “How does she do that?,” when in reality, the water may not have been deep and there may have been a room beneath the water where the person chained up can break free, get dressed in a new costume, and then emerge in a door at the back of the stage. TV has long shown that magic tricks are really learned illusions that give the appearance of supernatural power when they have none.

When it comes to the origin of all living things, though, there’s been none of the learned magic tricks that Dawkins supposes in his analogy. No human has been able to “learn the tricks” of combining the right chemicals in the science lab to create life in the laboratory. If the Christian view of the origin of life could be chalked up to a magic trick, all humans would have an instruction manual on how to create their own biological life in the world. We don’t have that, so Dawkins’s analogy breaks down. 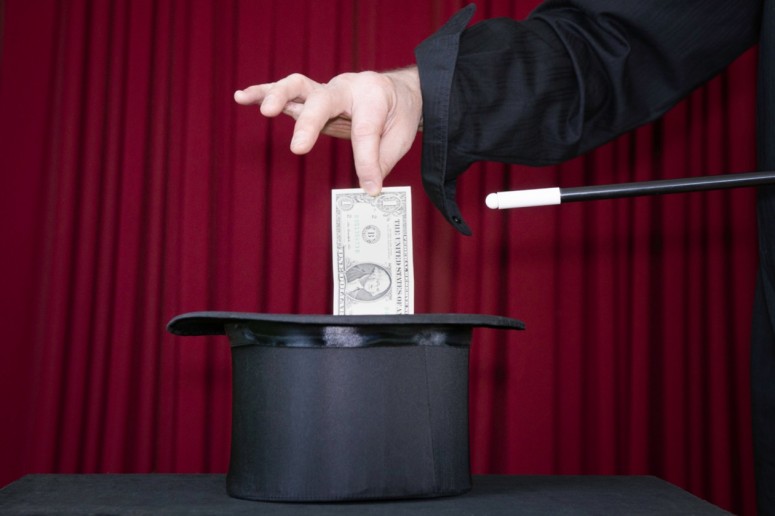 If science is God, would we really expect God to allow us to have His creative power in its entirety to let us mix chemicals, create life in the science lab, and bring to life the desire of Adam and Eve to be equal with God? I think not.

4 thoughts on “Divine Creation is No Magic Trick: The error of the Dawkins analogy”