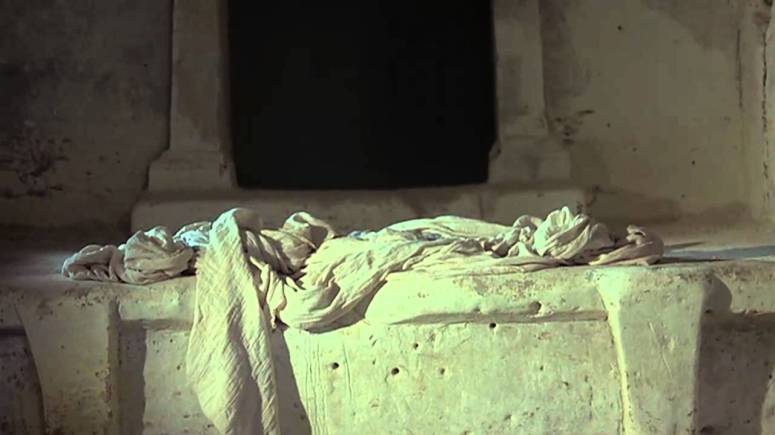 The same problem occurs in the accounts of Jesus’ resurrection. On the third day after Jesus’ death, the women go to the tomb to anoint his body for burial. And whom do they see there? Do they see a man, as Mark says, or two men (Luke), or an angel (Matthew)? This is normally reconciled by saying that the women actually saw “two angels.” That can explain everything else — why Matthew says they saw an angel (he mentions only one of the two angels, but doesn’t deny there was a second), why Mark says it was a man (the angels appeared to be men, even though they were angels, and Mark mentions only one of them without denying there was a second), and why Luke says it was two men (since the angels appeared to be men). The problem is that this kind of reconciling again requires one to assert that what really happened is unlike what any of the Gospels say — since none of the three accounts states that the women saw “two angels.” [Bart Ehrman, “Jesus, Interrupted: Revealing the Hidden Contradictions in the Bible (And Why We Don’t Know About Them). New York: HarperCollins, 2009, page 8].

Were there two angels, one angel, or one man at the tomb when Mary Magdalene and the other women approached the place where Jesus’s body laid? That is the question before us today. There are a few so-called “contradictions” we’ve dealt with in Scripture with regard to my old professor’s criticisms (yes, Bart Ehrman is a former professor of mine who taught me in a class at UNC-Chapel Hill some years ago), such as 1) the number of times the rooster crowed before Peter denied Jesus and 2) whether Abiathar or Ahimelech was the high priest when David ate the priestly bread. Today’s post is back to tackle another so-called contradiction or inconsistency regarding men/angels at the tomb.

However clever an argument Ehrman gives, it isn’t that convincing. First, how is it that reconciling the accounts means that one would “assert that what really happened is unlike” what the Gospels say? The whole appoint of reconciling the Gospel accounts is to show how they fit together. If one assumes that the Gospel accounts are contrary to each other, one would assert such a notion. If one assumes that the Synoptics can be reconciled (which is the point of labeling Matthew, Mark, and Luke “synoptics” in the first place), then harmonizing the Gospels is to do nothing more than present a full account of what actually happened when the women visited the tomb where Jesus had lain for three days.

Making sense of “an angel,” “a man,” and two angels

Now, if one assumes that the Gospel accounts can be reconciled, we can see how Matthew, Mark, and Luke work together.

Mark and “a young man”

Now when the Sabbath was past, Mary Magdalene, Mary the mother of James, and Salome bought spices, that they might come and anoint Him. 2 Very early in the morning, on the first day of the week, they came to the tomb when the sun had risen. 3 And they said among themselves, “Who will roll away the stone from the door of the tomb for us?” 4 But when they looked up, they saw that the stone had been rolled away—for it was very large. 5 And entering the tomb, they saw a young man clothed in a long white robe sitting on the right side; and they were alarmed. (Mark 16:1-5)

Mark writes that the women saw “a young man clothed in a long white robe,” which tells us that the “man” in question was an angel. After all, angels were often described as men, and humans believed the angels to be men throughout Scripture:

Now the two angels came to Sodom in the evening, and Lot was sitting in the gate of Sodom. When Lot saw them,he rose to meet them, and he bowed himself with his face toward the ground. 2 And he said, “Here now, my lords, please turn in to your servant’s house and spend the night, and wash your feet; then you may rise early and go on your way.”

And they said, “No, but we will spend the night in the open square.”

3 But he insisted strongly; so they turned in to him and entered his house. Then he made them a feast, and baked unleavened bread, and they ate.

4 Now before they lay down, the men of the city, the men of Sodom, both old and young, all the people from every quarter, surrounded the house. 5 And they called to Lot and said to him, “Where are the men who came to you tonight? Bring them out to us that we may know them carnally.” (Genesis 19:1-5)

In Genesis 19:5, the men of the city of Sodom believed the two angels to be “men” (v.5), though Lot knew they were angels (he calls them “lords” and bows down to the ground as though to worship them).

Another example of angels being perceived as men pertains to Paul’s instructions to Jewish Christians in Hebrews 13:

Let brotherly love continue. 2 Do not forget to entertain strangers, for by so doing some have unwittingly entertained angels. (Hebrews 13:1-2)

What is being said in Hebrews 13:2 is that, by entertaining strangers (other humans), some believers “have unwittingly entertained angels.” The word “unwittingly” here means “unaware” or “not knowing,” which means that believers wouldn’t be able to distinguish the angels from ordinary men (otherwise, they’d know right away they were angels).

With that said, it’s not contradictory that the women would’ve seen “a man” who had a long white robe (the robe an indication that the “man” was really an angel).

Now, on to Matthew.

Matthew and “an angel”

Now after the Sabbath, as the first day of the week began to dawn, Mary Magdalene and the other Mary came to see the tomb. 2 And behold, there was a great earthquake; for an angel of the Lord descended from heaven, and came and rolled back the stone from the door, and sat on it. 3 His countenance was like lightning, and his clothing as white as snow. 4 And the guards shook for fear of him, and became like dead men. (Matthew 28:1-4)

Matthew says that an angel came from heaven, that “his clothing [was] as white as snow.” White clothing is a sign of an angel, so Matthew reports that he saw “an angel of the Lord” descend from heaven (v.2). This fits with Mark because there’s only one angel reported. What’s interesting is that Matthew reports the angel came from heaven. Angels come from Heaven (we know that), but the fact that Matthew reports an earthquake, that the guards were afraid and “became like dead men” points to more detail than the other Gospel writers give regarding the rolling away of the tomb stone.

Now on the first day of the week, very early in the morning, they, and certain other women with them, came to the tomb bringing the spices which they had prepared. 2 But they found the stone rolled away from the tomb. 3 Then they went in and did not find the body of the Lord Jesus. 4 And it happened, as they were greatly perplexed about this, that behold, two men stood by them in shining garments. (Luke 24:1-4)

We’ve seen the focus on one angel, but we are now given “two angels” as the testimony of Luke’s Gospel. What are we to do with this? Well, John affirms Luke’s two angels (John 20:12), but how do we square two angels with one angel in Matthew and Mark’s Gospels? It could be the case that Matthew and Mark only see one angel, whereas John sees two angels, and Luke, having researched everything carefully, reports that two angels were present. Mark isn’t one of the twelve original disciples, so we’d assume Matthew and John are in agreement despite one writing about one angel while John records two angels. Perhaps it is the case that only one angel was seen by some while others saw (and had reports that testified to) two angels.

Stacking the Deck: Why Matthew, Mark, and Luke are worth reconciling

So now that we’ve reconciled the three Gospels, the question comes down to this: why should we reconcile these Gospels? Why should we not treat the Gospels as Bart Ehrman does: three isolated accounts that clash with each other?

Bart Ehrman says the things he does because he believes the Scriptures themselves contradict. He presumes that what is read in Scripture provides three different accounts that are meant to remain separate. And yet, is it not the case that all three Gospel writers are describing the same event: the angels at the tomb who report that Jesus has risen? Eyewitness accounts in today’s time of the same event are assumed to have information that works together; when someone says something not found in another event, that detail doesn’t mean that the testimony clashes with the others.

No one in law enforcement would assume that a testimony with more detail is automatically fabricated and not worth listening to; rather, one would presume that more detail is better because it provides a more credible eyewitness.

Thus, the fact that all three eyewitness accounts record the same event with similar details (that the angels appearing as men were clothed in white robes) is a fact in accordance with credibility. The details only add to the credibility rather than detract from it.

In the end, Ehrman claims that to reconcile the Gospels is to do nothing more than create a new Gospel that the three synoptic Gospels don’t match, but that is to assume the Gospels were created to differ with one another. Perhaps they were created to tell us about the same event; if they were, then we should do everything to piece their information together to get the bigger picture of what happened in the life of Jesus from beginning to end. Why should we assume Ehrman’s view of the Gospels as independent accounts that merely circulated in the communities as contradictory accounts?

Would we assume three eyewitness testimonies of an accident, robbery, or criminal activity are three separate accounts that clash with one another? It is the presumption that the accounts will have some similarities and match in some details that motivates investigative work.

3 thoughts on “One young man, one angel, or two angels? Bart Ehrman on the Gospel discrepancies”